Many thanks for the great interview

Representatives from various working worlds in the city of Düsseldorf were selected for the Düsseldorf Tourism website.

In her interview, journalist Ilona Marx introduces the curator Ralph Goertz - director of the IKS. Thank you very much!

Collaboration with the IKS PHOTO

Around 50,000 paying visitors were recorded at the exhibition curated by Ralph Goertz (IKS) and Ludger Derenthal (SMB) "Image and Space. Candida Höfer in dialogue with the Photography Collection of the Art Library" at the Museum of Photography in Berlin.

The first cooperation between the IKS and the National Museums in Berlin was internationally acclaimed by visitors and the press. A total of 90 works by Candida Höfer entered into an artistic dialogue with 120 works from the last 150 years from the Art Library's collection - including works by Eugène Atget, Albert Renger-Patzsch, Frank Cousins, Florence Henri and Helga Paris.

We are delighted about the great cooperation and the success of the exhibition!

The brilliant picture show "Facing Britain" presents a multifaceted view of the British Isle and its social and cultural characteristics. In addition to everyday scenes that are as banal as they are curious and sympathetic, viewers are also made aware of politically explosive events: Ascot meets Belfast, the Falklands War meets intimate moments in British living rooms, hip bankers meet desperate workers. Where the boundaries of the documentary blur, aspects of artistic or portrait photography come to light.

The exhibition "Facing Britain", curated by Ralph Goertz, will be shown for the first time at GAF - Galerie für Fotografie after venues in Goch, Darmstadt, Goslar and Kraków.

The first report commissioned by the State Capital Düsseldorf on "Duesseldorf and Photography" appointed three of my exhibitions as landmark projects in their younger history. Number three: SUBJECT and OBJECT. PHOTO RHINE RUHR (2020) at Kunsthalle Düsseldorf. Curated by Ralph Goertz with Gregor Jansen and Dana Bergmann.
Many thanks!

The first report commissioned by the State Capital Düsseldorf on "Duesseldorf and Photography" appointed three of my exhibitions as landmark projects in their younger history. Number two: MARTIN PARR RETROSPECTIVE (2019) at NRW-Forum Duesseldorf. Created and curated by Ralph Goertz
Many thanks!

The first report commissioned by the State Capital Düsseldorf on "Duesseldorf and Photography" appointed three of my exhibitions as landmark projects in their younger history. Number one: TWO RIVERS. JOACHIM BROHM / ALEC SOTH (2019) at NRW-Forum Duesseldorf. Created and curated by Ralph Goertz
Many thanks!

FACING BRITAIN will be presented at MuFo - Museum for Photography Kraków as the first international collaboration by the IKS PHOTO department. The show presents 204 works by 39 photographers and was curated by Ralph Goertz, head of the IKS, together with Dominik Kurylek (MuFo Kraków).

"The photographs presented in the exhibition show the originality of British photography and testify to the attitude of documentary filmmakers who, thanks to their exceptional ability to establish close contact with the photographed, create striking images that encourage critical but comprehensive reflection on the reality depicted."

Kunsthalle Darmstadt and IKS PHOTO have agreed to operate a joint gallery, STUDIO OST, at Kunsthalle Darmstadt. Ralph Goertz has been appointed as the chief curator responsible for the photographic programme of the regularly changing exhibitions.

The first STUDIO OST exhibition will be "Daniel Meadows - SUBURBIA" from 9 April to 14 August.

Daniel Meadows is one of the most important pioneers of documentary photography in Great Britain. His already legendary reputation is based on his Free Photographic Omnibus, Meadows' journey through England in 1973-74, during which he travelled 10,000 miles in a converted double-decker bus and photographed 958 people on the streets of 22 different British cities.

With SUBURBIA he succeeded in creating an impressive, sociological study of the milieu, which was first shown as a solo exhibition at the London Photographers' Gallery in 1987. The series was mainly shot in Bromley, the affluent London borough where the then Prime Minister Margaret Thatcher had raised her own family in the 1960s.

Two exclusive portfolios were created for the exhibition, each containing six prints from the Seirien Free Photographic Omnibus and SUBURBIA in an edition of 3+1AP. The portfolios are available at the Kunsthalle Darmstadt or at our Support/Editions.

Collaboration between Museum for Photography Berlin and IKS PHOTO.

Image and Space. CANDIDA HÖFER in Dialogue with the Photography Collection of the Kunstbibliothek

Candida Höfer explores built spaces in her photography. Her world-famous interiors focus on libraries, museums, restaurants, theaters, and other public spaces, allowing us to experience architecture in a new way. In comparison with photographic interiors from the Kunst-bibliothek's Photography Collection, which is over 150 years old, a dialogue develops between applied photography and artistic work.

With approximately 90 works, the exhibition at Berlin's Museum für Fotografie opens up a broad cross-section of Candida Höfer's photographs from 1980 to the immediate present. The long tradition of her architectural photographs, however, also extends deep into the classical canon of this field of work. In dialogue with pendants and counter-images from the Kunstbibliothek's Photography Collection, Höfer's particular approach to her pictorial motifs is revealed in a particularly impressive way. 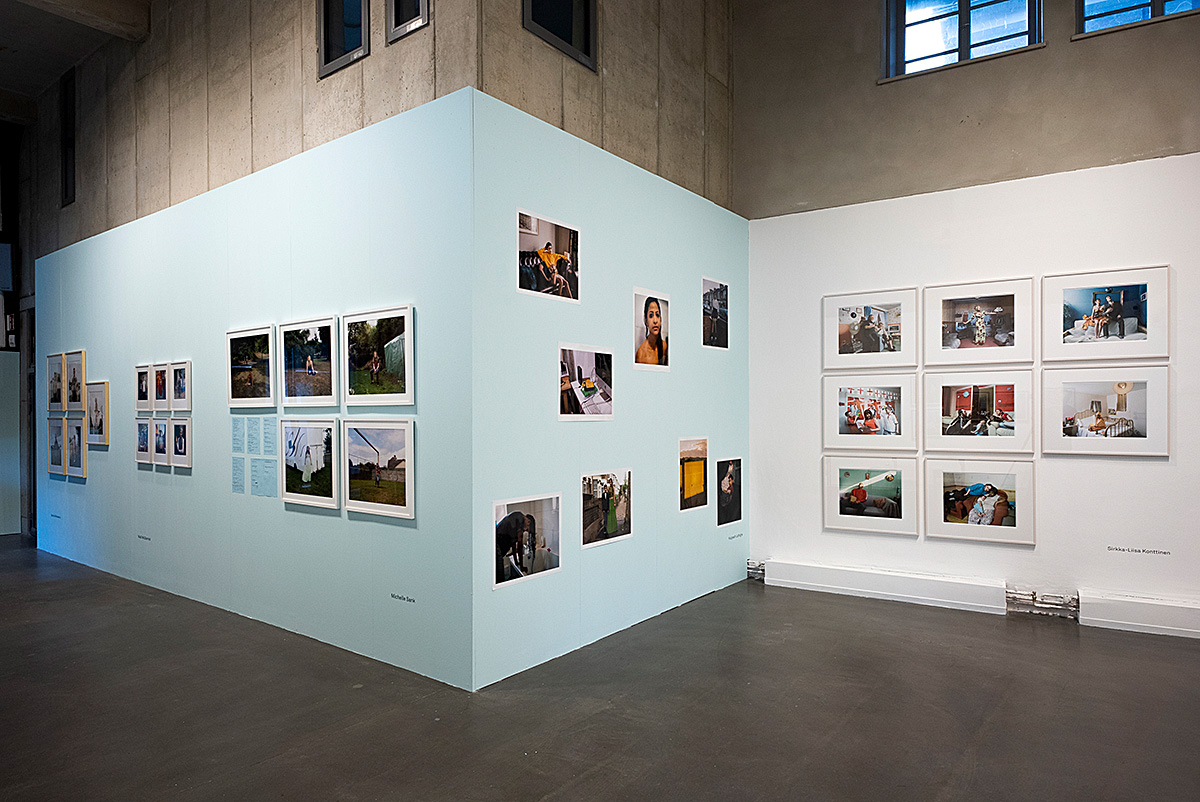 "The exhibition curated by Ralph Goertz overwhelms with its thematic diversity, strikes tones from the finest humour to the greatest dejection, shows people from the lightness of being to the search for recyclables on the rubbish dump. [...] Alongside this humorous, often to the point, contemplation of typically British idiosyncrasies, the exhibition also shows painful conditions to the point of punching in the pit of the stomach."

Facing Britain, the first exhibition by the new photo department of the IKS, was opened at the Kunsthalle Darmstadt and presents with 48 participating photographers and 290 works the largest survey show on the development of british documentary photography since the 1960s. This internattional touring exhibition was curated by Ralph Goertz, head of the IKS.

"No fewer than 47 of these photographers are now represented with individual works or series in the show “Facing Britain” curated by Ralph Goertz in the Kunsthalle Darmstadt, which adds up to an impressive retrospective of British documentary photography from the early 1960s to 2020." Christian Riethmüller, Frankfurter Allgemeine Zeitung

"An exhibition of impressive breadth [..] And just as Daniel Meadows' intense portraits add up to a picture of society, the synopsis of "Facing Britain" produces the finely differentiated, very sensually graspable picture of a country." Johannes Breckner, Echo Kultur Darmstadt

Ralph Goertz is appointed as a member of the DGPh

The director of the IKS, Ralph Goertz, has appointed as a new member of the German Society for Photography, DGPh, for his curatorial work and his support of the medium of photography. Many thanks!!

The promotion of the medium of photography is enshrined in the statutes of the non-profit IKS PHOTO gUG.

"FACING BRITAIN - British Documentary Photography since the 1960s" manifests the high standards and immediately presents the show, hailed as "world class" and a "landmark exhibition", in cooperation with five international partner institutions. In addition to the unique list of artists and the innovative concept of a "growing exhibition", the exhibition is distinguished above all by its diverse approach and the first-time participation of "photographers of colour".

Curated by the director of the IKS, Ralph Goertz, the exhibition serves art historians, photo enthusiasts and people of all ages alike, as it features strong themes relevant to our times: Migration, Protest, How We Are, Thatcher Era, Youth Unemployment, Diversity, Gender and Identity.

Facing Britain was conceived as a touring exhibition and is the first survey exhibition on the development of British documentary photography since the 1960s. With a total of 230 photographic works and 28 artists, Facing Britain brings together almost all important representatives of British documentary photography and shows stars like David Hurn and Martin Parr alongside rediscovered and new positions.

The exhibition thus offers a unique insight into the developments in the field of photography in the United Kingdom, which are interwoven with continental Europe and North America, but also independent of them.

The IKS has founded their own Photo department